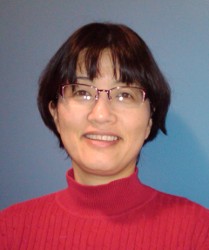 Miyuki Hughes is originally from Japan and came to the United States in 1989 to teach Japanese in the Elkhart School Corporation. She subsequently taught at IUSB, served as an interpreter and translator for both local and regional businesses and occasionally worked with Japanese companies doing business in the area.

Miyuki works for a Japanese company called RKC Instruments which distributes temperature controls for plastics machinery and equipment. They have a nationwide market and Miyuki assists the President with all interpretation and translation needs.

Miyuki has two daughters, Eleanor and Fiona. Both participated for many years in programs at the Riverbend Community Math Center starting in the fall of 2006.

This work placed into the public domain by the Riverbend Community Math Center.